Bringing Down the House

Blackjack is one of the casino card game classics and it has a long and rich history behind it. Today, most people play blackjack online at sites like 32red online casino and the game is less about personalities than it used to be. But if anyone is asked to think of a famous blackjack player, many people would name members of the MIT Blackjack Team, who first started playing in the seventies and eighties. A hundred years ago, however, blackjack players in California might have come up with a different name.

Eleanore Dumont is probably the first ever female blackjack legend. She was a French woman who moved from her home country and emigrated to the States in the 1800s. An accomplished card dealer, she made her living playing blackjack and other casino games. On moving to the States, she lived in various places including Deadwood, South Dakota; Pioche, Nevada and San Francisco, California.

When she had settled in Nevada City, California, Mme Dumont opened up her own blackjack casino, called Vingt Et Un. Though the majority of her clientele were rough gold mining types, Mme Dumont expected decorum in her establishment and no fighting or swearing was allowed. Only well-dressed men were permitted entry and no women could come in, apart from Mme Dumont herself. 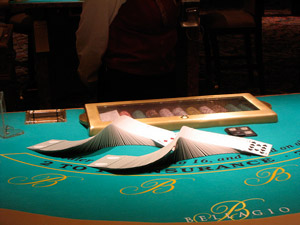 She was nicknamed Madame Moustache, thanks to the dark line of hair on her upper lip. Dumont treated her customers well, serving them champagne during the games. She was usually the dealer, and had a reputation for winning more often than she lost. Such was the novelty of a female dealer that men came from all around to gamble at Vingt Et Un. In fact, the establishment was such a success that Mme Dumont decided go into business with another gambler, Dave Tobin, and together they opened Dumont’s Palace. The new business was also very successful, but when the gold rush came to an end, Mme Dumont’s business suffered, so she moved onto pastures new.

She was conned out of her fortune at one stage by a man named Jack McKnight, and took a long time to rebuild her finances through gambling. Later in her life, when Madame Moustache was no longer so attractive herself, she became the ‘madame’ of a brothel. Her last known place of residence was in Bodie, California. It was there that she died of a morphine overdose, immediately after having suffered a bad gambling loss.

Today, being a female blackjack dealer is no big deal, and indeed there are a number of famous female blackjack players out there, doing the circuits of different live blackjack tournaments. But Madame Dumont was one of a kind back in the 1800s.

Find out everything concerning methods and techniques used by the MIT blackjack team for winning! You will reveal the secret of their success and big winnings at once.

Be ready to learn everything regarding such a blackjack winning strategy as card counting! If the information given is not enough for you, discover more at the website BlackjackDoc.com!

The MIT blackjack team always welcomed all people who wanted to become professional card counters, but not all of them became noticable. Read about famous team members.

Have noticed a mistake? Know what to do for improving this website? Your opinion is very important for us! Contact us and let's discover blackjack game together!